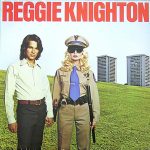 Reggie Knighton is a singer, songwriter and lead guitarist from Biloxi, Mississippi who relocated to Los Angeles, California at an early age and grew up there.

His professional career started as the lead guitarist for The Grass Roots from 1974 to 1975. He arranged an audition through Dennis Provisor who had experience with the group since 1969. He played lead guitar during the period of The Grass Roots “Mamacita” single (which charted), their self titled album and the US tour in support of it. He played with Rob Grill (lead vocals and bass), Dennis Provisor (vocals and keyboards) and Joel Larson (drums).

He then worked with John Sebastian on his very popular “Welcome Back” album, the #1 single released and the US tour in support of it in 1976. After that whirlwind experience with a gifted talent like Sebastian, he then played with a band called White Horse in 1977.

Later in 1977, he produced 4-track demos of his compositions in his own home studio. The tapes caught the ear of a management company, which landed him a record deal with CBS Records. He released his self titled solo album in 1977.