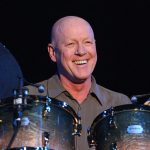 In the 1970s, Kunkel worked so frequently with bassist Leland Sklar, guitarist Danny Kortchmar, and keyboardist Craig Doerge that they eventually became known as “The Section” and recorded three albums under that name between 1972 and 1977.

Russ Kunkel had a cameo as doomed drummer Eric “Stumpy Joe” Childs in the 1984 film This Is Spinal Tap.