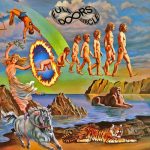 Full Circle is the eighth studio album by the American rock band the Doors, released in August 1972. It is the second album after Jim Morrison’s death, and the last they compiled until 1978’s An American Prayer. The album includes “The Mosquito”, the last Doors single to chart.

The band’s first album without Jim Morrison, 1971’s Other Voices, had reached #31 on the Billboard chart, a modest success for the group considering the monumental shadow cast by the passing of the “Lizard King.” The band – now a trio consisting of keyboardist Ray Manzarek, guitarist Robby Krieger, and drummer John Densmore – chose to record Other Voices at their rehearsal space known as the Workshop, the same two-story building at 8512 Santa Monica Boulevard they had recorded the successful L.A. Woman, but for Full Circle they opted to move to Hollywood’s A&M Studio. While Other Voices was, to a degree, an extension of the L.A. Woman sessions (some of the tracks had been worked up before Morrison had left for Paris), Full Circle was a standalone work that saw the band delve deeper into jazz and work with some top shelf session musicians. Bruce Botnick, who had engineered all the Doors albums up to that point and co-produced both L.A. Woman and Other Voices, declined to partcipate in the sessions. In 2015 he admitted to Uncut’s Tom Pinnock that he could not remember whether he was asked to return or not, but maintains he would have turned down the offer, reflecting, “The guys wanted to have a chance to work with some other musicians. As they went into Full Circle they took that extension even further.”

1 Get Up And Dance

8 It Slipped My Mind

9 The Peking King And The New York Queen