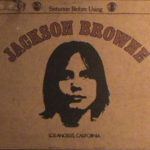 Jackson Browne is the eponymous debut album of singer Jackson Browne released in 1972. It peaked on the Billboard 200 chart at number 53. Two singles were released with “Doctor My Eyes” peaking at number 8 on the Pop Singles chart and “Rock Me On the Water” reaching number 48.

The album is often mistakenly called Saturate Before Using, because the words appear on the album cover, which was designed to look like a water bag that would require saturation in order to cool its contents by evaporation. For this very reason, Asylum Records executives suggested to no avail that the words be removed from the album cover and nearly rejected the cover art outright. However, the initial pressings not only included the text, but the cover carried a burlap-like feel to further the water bag theme.

The confusion over the title returned when the album was converted to CD format, when the words appeared on the spine of the jewel case as the album title.

Browne told the story of the cover’s creation and spoke of the title’s confusion in an interview with the album designer Gary Burden for his 2002 DVD Under The Covers: “I remember being on the phone with Gary… talking about what the album cover should be, and I happened to be in a room that had a water bag on the wall. It was just one of the things that I collected driving around on trips and stuff. And I was looking at this bag as he was saying ‘what do you think it ought to be?’ I was thinking, ‘well, it could be a water bag.’ … it said ‘saturate before using’ on the front … ‘You know, Gary, on mine, it says this on the back.’ And you said, well, so?’ And ‘if you put it on the front, people are going to think that’s the title.’ And you said, ‘don’t be ridiculous. Who would think that was the title?’ I said, ‘Yeah, you’re right.’ So, not only does everyone think that’s the title of that album, but my record company thinks that’s the title of the album.”

1 Jamaica Say You Will

2 A Child In These Hills

7 Under The Falling Sky

9 Rock Me On The Water