Steve Lukather, The Be Five 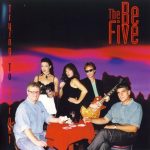 The Be Five was a band composed of actors from the television show Babylon 5. It was masterminded by Bill Mumy and made up of Mumy, Andreas Katsulas, Mira Furlan, Peter Jurasik and Claudia Christian, with Patricia Tallman singing backup in two tracks. Mumy wrote or co-wrote all tracks, and each performer was given the lead vocal in two songs.

The band’s only album, Trying to Forget, was originally released in 1998 as a limited edition of 2500 copies and only available at conventions at which one of the performers were present. In July 1999 it was put on general release and a twelve-page booklet was added. The album was re-released in 2012 by Renaissance Digital with two new tracks “My Brother’s Moved On” (dedicated to the memory of Andreas Katsulas, Richard Biggs, Jeff Conaway, Michael O’Hare and Tim Choate) and “Last Train”.

2 If You Want Candy