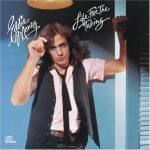 Life For The Taking is Eddie Money’s platinum selling second album. It was recorded in 1978, and released in 1979 on manager Bill Graham’s Wolfgang imprint via Columbia Records. The album includes the singles “Can’t Keep A Good Man Down”, “Gimme Some Water” and “Maybe I’m A Fool.”

With Money seemingly endlessly on the road promoting his previous debut album, this effort was primarily written in hotel rooms with a variety of band members and worked up during sound checks prior to performances. The final track, “Call On Me” was often interjected into the set lists prior to the release of this album and received a strong response in spite of its more soulful, less frantic composure.

This album also marked a conscious effort to expand Money’s audience with the inclusion of several more pop and dance oriented numbers. This direction would continue to be expanded upon with the subsequent release “Playing For Keeps”. The album was met with less enthusiastic critical response than its predecessor with a number of the pundits citing a weakness of quality songwriting and the inconsistency of style as pitfalls.

Money resumed his frantic promotion and touring schedule upon the release of this album. The cover shot plays on a rendition of the artist mocking his debut album artwork but with an obvious worn and tired appearance.

As with the previous release, both singles were issued in promotion only edited versions, while the retail releases featured tracks from the album as B-sides. By now, the artist was headlining mid sized venues and a number of the dates featured the then up-and-coming Pat Benatar as support.

5 Rock And Roll The Place