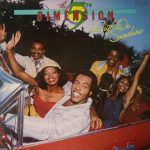 High on Sunshine is the 12th album by The 5th Dimension. It was released in 1978 by Motown Records.

Originally known as The Versatiles and formed in late 1965, according to founder, LaMonte McLemore’s currently released autobiographical memoir, the group changed its name to the hipper moniker, The 5th Dimension, by 1966 and became best-known during the late 1960s through early 1970s for popularizing the hits “Up, Up and Away”, “Stoned Soul Picnic”, “Medley: Aquarius/Let the Sunshine In (The Flesh Failures)”, “Wedding Bell Blues”, “One Less Bell to Answer”, “(Last Night) I Didn’t Get to Sleep at All”, and The Magic Garden LP.