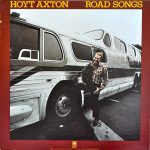 Hoyt Wayne Axton (March 25, 1938 – October 26, 1999) was an American folk music singer-songwriter, and a film and television actor. Hoyt Axton became prominent in the early 1960s, establishing himself on the West Coast as a folk singer with an earthy style and powerful voice. As he matured, some of his songwriting became well known throughout the world. Among them were “Joy to the World”, “The Pusher”, “No No Song”, “Greenback Dollar”, and “Never Been to Spain”.

Hoyt Axton had many minor singing hits of his own, such as “Boney Fingers”, “When the Morning Comes”, and 1979’s “Della and the Dealer”, as well as “Jealous Man” (the latter two he sang in a guest appearance on WKRP in Cincinnati). His vocal style featured his distinctive bass-baritone (which later deepened to near-bass) and use of characterization.

3 In A Young Girl’s Mind

6 Lion In The Winter

8 When The Morning Comes

12 Less Than The Song