1977 Eric Carmen – Boats Against the Current 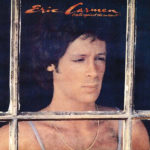 Boats Against the Current is a 1977 album by Eric Carmen. The title is taken from a line in the novel The Great Gatsby by F. Scott Fitzgerald, “So we beat on, boats against the current, borne ceaselessly into the past.” It was Carmen’s second solo LP, after the Raspberries disbanded. It peaked at #45 on the Billboard album chart.

The album yielded two charting singles, the title track as well as “She Did It.” “She Did It” is the bigger hit from this album, which reached #23 Billboard and #15 Cash Box, as well as #11 in Canada. The title track subsequently reached #88 Billboard and #92 Cash Box, and “Marathon Man” was released as a third single but failed to chart. “Love is All that Matters” melody is lifted from Tschaikovsky’s “Fifth Symphony, Second Movement.”

Guest musicians on this album included back-up vocals by several of the Beach Boys and Burton Cummings (formerly of the Guess Who), guitar by Andrew Gold, and drumming by Toto’s Jeff Porcaro.

The title song was covered in 1978 by Olivia Newton-John on her album Totally Hot.

1 Boats Against The Current

4 Take It Or Leave It

5 Love Is All That Matters

7 I Think I Found Myself