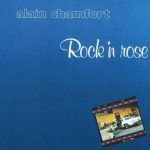 Rock’n Rose is the second album released in 1977 by Alain Chamfort at CBS Records. This album marks the first collaboration between Chamfort and Serge Gainsbourg, who writes all the lyrics for the album.

Since 1976 and after several years at the Arrow, Alain Chamfort signed with CBS Records, leaving him complete freedom in the artistic choice. The same year he published his first album at CBS, testing Marriage. In early 1977, he was invited by Véronique Sanson to the chorus on his Hollywood album, recorded in Los Angeles. The discovery of how to work in the US studios (quality of musicianship, seriousness with which they work, they release energy and professionalism arrangers and sound engineers) for three weeks Chamfort pushes to want to record its second album in Los Angeles with Californian musicians, with the agreement of the owner of CBS.

In the summer of the same year, he left with Michel Pelay in Los Angeles and chose musicians to participate in the recording: pianist and arranger David Foster who contacts, among others, the Porcaro brothers (Jeff on drums, Steve piano and Mike on bass), who later formed the group Toto. Chamfort also chooses trumpeter Steve Madaio for brass arrangements. Rhythmic are recorded on seats, while the strings and percussion are recorded in stride to London. Subsequently, the singer and composer Serge Gainsbourg contact to write texts, he agreed after listening and appreciated the recorded playbacks, prompting him to write all the words of the album.

Chamfort recorded the vocals in Paris with the sound engineer Dominique Blanc-Francard and goes to London, accompanied by Gainsbourg, Jane Birkin and Pelay, in order to do the mixing.