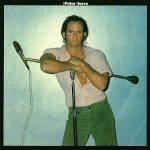 Peter Ivers is the fourth solo album by Peter Ivers, released in 1976

In 1971 Peter Ivers replaced Yolande with Asha Puthli on Take It Out On Me, his second album for Epic. The single from this second album, a cover of the Marvin Gaye number, Ain’t That Peculiar, backed by Ivers’ original, Clarence O’ Day, was released and briefly entered the Top 100 Singles Billboard charts but the album was shelved by Epic (only finally seeing the light of day in 2009). Subsequently, Peter signed with Warner Bros., where he recorded two more albums.