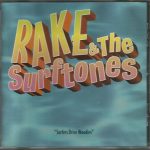 RAKE & the Surftones – SURFERS DRIVE WOODIES is an album which will take you back to the sixties when the surf music waves were high, recorded in a surf style (Dick Dale, Ventures type of thing.) Fun music with raw solid energy giving you the feeling of surfing the waves, in the sunset of the endless summer in Hawaii or Southern California, where the swell is running and the waves break perfectly, visualizing the lifestyle of the carefree surfer, riding the surf, driving his Woodie, beach partying and watching the surf scene for the “Big One”. RAKE, alias Jay Graydon, plays together with a host of the best studio musicians in the world, e.g. Dean Parks (Steely Dan), Steve Lukather (Toto), David Hungate (Toto), John Ferraro, Joseph Williams (Toto), Jason Scheff (Chicago) and many more.

You may want to note that this album was recorded as a studio test after my house and studio were re-built caused by the California Earthquake.  I came up with the surf record concept as it would be fun for all of the musicians to revisit our youth. I told the guys to play like we are 14 years old.
On the song (SURFERS TOE JAM), I called many guitarists to come to the studio as to play a solo. I had my Fender Showman 15 and a Fender tank reverb set up for the guys along with a strobe tuner.

I said there are 2 rules:
1 Tuning up is optional.
2 Play in the 60’s surf style. If any of you cats play too good (meaning not like how you played at age 14), you get one more chance. If still playing too good, no solo for you!

I seem to remember that every solo was the first take.

I then sent the tapes to David Hungate in Nashville as to have a bunch of guys play a solo, which turned out well but sometimes more in a country style. No matter as they did play like they were young.  I think there are 26 solos on that song.

Btw, the liner notes and the lyrics (on two songs) are very funny with so many inside jokes such as Sandy Grill and the C cups. Surfers Drive Woodies is intentionally very funny if you know that woodie has 2 definitions, one being the car of choice in those days were old Woodie station Wagons. The other definition is obvious, which was the one intended.

This album was recorded live (except for the overdubs) commencing on October 9th, 1995, using the Harpoon Studios Remote truck parked at Malibu Beach next to the pier.