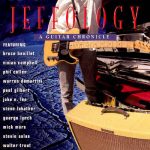 Jeffology: A Guitar Chronology is a tribute album to Jeff Beck. The album is produced, engineered and mixed by Billy Sherwood (Lodgic, World Trade and Yes).

Notes from the album: When the concept was developed to record this album, we were looking for a body of “guitar oriented work” that we felt deserved attention and could feature a number of rock’s premier guitar players….

4 Cause We’ve Ended As Lovers