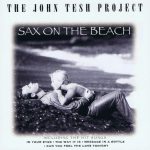 Sax On The Beach is an album by John Tesh, released in 1995 on GTS Records.

John Frank Tesh (born July 9, 1952) is an American pianist and composer of pop music, as well as a radio host and television presenter. His ten-year-old Intelligence for Your Life radio show reaches 14.2 million listeners/week, and is syndicated by Teshmedia on 400 stations in the U.S., Canada, and the UK. In addition, since 2014, he has hosted Intelligence for Your Life TV with his wife Connie Sellecca. The syndicated TV program airs on 154 stations and reaches 93% of the U.S.

2 I Keep Forgettin’ (Every Time You’re Near)

9 Biggest Part Of Me

10 Message In A Bottle

11 Piano In The Dark

12 Can You Feel The Love Tonight