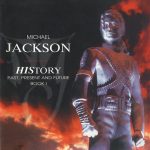 HIStory: Past, Present and Future, Book I (usually shortened to HIStory) is the ninth studio album by American recording artist Michael Jackson. It was released on June 16, 1995 by Epic Records. This is Jackson’s first album on his own label, MJJ Productions, and consists of two discs: the first disc (HIStory Begins) is a compilation of some of his greatest hits from 1979 onward, while the second disc (HIStory Continues) is a studio album composed entirely of new material. The majority of the second disc’s tracks were written and produced by Jackson, often in conjunction with collaborators.

HIStory was Jackson’s return to releasing music following the accusation of child sexual abuse in August 1993. Many of the 15 songs pertain to the accusations and Jackson’s mistreatment in the media, specifically the tabloids. The songs’ themes include environmental awareness, isolation, greed, suicide and injustice.

HIStory is Jackson’s most controversial album. Jackson was accused of using anti-Semitic lyrics in “They Don’t Care About Us”. Jackson stated that he did not mean any offense and on multiple occasions denied anti-Semitism. The dispute regarding the lyrics ended with Jackson re-recording them. R. Kelly was accused of plagiarizing one of the album’s songs, “You Are Not Alone”. In 2007 a judge ruled that the song was plagiarized and the song was subsequently banned from radio stations in Belgium.

The album was generally well received by music critics and was also commercially successful, debuting and peaking at number one in many counties, including the United States, Canada, Australia, France and the United Kingdom, as well as charting within the top ten in Spain, India and Mexico. The album was certified six times platinum by the end of 1996 in Europe, making it the best selling album of the year in the combined European market.[1] The album was nominated for five Grammy Awards, winning one for Best Music Video – Short Form for “Scream”. The greatest hits disc of the album was reissued as a single disc on November 13, 2001, under the name Greatest Hits: HIStory, Volume I and has reportedly sold four million copies worldwide as of early 2010. The second half of the album, consisting of 15 new songs, was finally released separately in selected European countries in 2011.