All She Wants to Do Is Dance“ is a song written by Danny Kortchmar and performed by Don Henley, co-lead vocalist and drummer for Eagles. It was released as the second single from Henley’s second studio solo album, Building the Perfect Beast, being Henley’s sixth single. It was one of Henley’s most commercially successful singles.

When Kortchmar was asked about the song he said “I had the groove and the music going. That record was made back when the technology had just started to really take over in music. I had one of the first Yamaha DX 7s, which was a keyboard that was used a ton in the ’80s, but we ended up luckily getting one of the first ones in the United States. It’s a synthesizer keyboard, and I used it to get that sound that you hear the record starting with.” 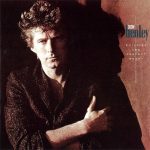