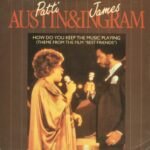 “How Do You Keep the Music Playing?“ is a song composed by Michel Legrand, with lyrics by Alan and Marilyn Bergman for the 1982 film Best Friends, where it was introduced by Patti Austin and James Ingram. The Austin/Ingram version became a single in 1983 and reached #45 on the Billboard Hot 100 and #5 on the Billboard Adult Contemporary chart. It was one of three songs with lyrics by Alan and Marilyn Bergman that was nominated for the Academy Award for Best Original Song at the 55th Academy Awards.