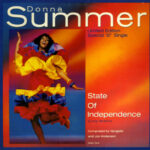 State of Independence“ is a song written by Jon Anderson and Vangelis. Cover versions have been recorded by several artists and it has been a hit single on three occasions. The song is written in a reggae/calypso style and features an abstract spiritual lyric.

Originally recorded by Jon and Vangelis for their 1981 album The Friends of Mr Cairo, “State of Independence” was released as a single the same year but did not chart. The song subsequently became better known when Donna Summer released a cover version a year later in 1982, which became a Top Twenty UK single (and repeated the same feat 14 years later when issued as a remixed version in 1996) and becoming a Number One hit in the Netherlands. In 1992, a third version of the song – retitled “Spiritual High (State of Independence)” – was recorded and released as a single by Moodswings, with vocals by The Pretenders lead singer Chrissie Hynde.