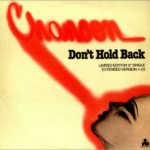 “Don’t Hold Back” is the only single that hit the charts by group Chanson (James Jamerson Jr and David Williams.

Chanson was an American studio-based disco group from the late 1970s.

Chanson was an American studio based disco group from the late 1970s, led by James Jamerson Jr (son of the sideman, James Jamerson) and David Williams. The group took their name from the French word for song. They were a one-hit wonder, reaching #21 on the Billboard Hot 100 chart in 1979 with “Don’t Hold […]