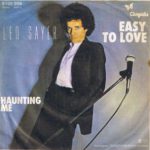 “Easy to Love”  is the second single by Leo Sayer from the album Thunder In My Heart. It was released in 1977.