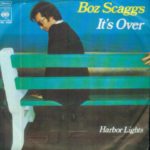 “It’s Over” is the first single from the Silk Degrees album by Boz Scaggs. It was released in 1976.

Silk Degrees is the seventh album by Boz Scaggs, released on Columbia Records in 1976. The album peaked at #2 and spent 115 weeks on the Billboard 200. It has been certified five times platinum by the RIAA and remains Scaggs’s best selling album. Silk Degrees spawned four singles, of which “It’s Over”, “Lowdown”, and […]