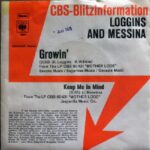 Growin’ is a single by Loggins & Messina. The song was written by Kenny Loggins and Ronnie Wilkins and taken from the Mother Lode album (1974).

Mother Lode is the fourth studio album (fifth release overall) by singer/songwriter duo Loggins & Messina, released in late 1974. It was their final album with their original backing band, because multireedist and violinist Al Garth would soon leave the band, but multireedist Jon Clarke, bassist Larry Sims and drummer Merel Bregante remained, and saxophonist […]