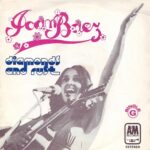 “Diamonds & Rust” is a song written and performed by Joan Baez. It was written in November 1974 and released in 1975.

In the song, Baez recounts an out-of-the-blue phone call from an old lover, which sends her a decade back in time, to a “crummy” hotel in Greenwich Village; she recalls giving him a pair of cuff-links, and summarizes that memories bring “diamonds and rust.” Baez has stated that the lyrics refer to her relationship with Bob Dylan.

The song, which was a top-40 hit for Joan Baez on the U.S. pop singles chart, is regarded by a number of critics, as well as by Baez fans, as one of her best compositions. It served as the title song on Baez’s gold-selling Diamonds & Rust album in 1975.

Diamonds & Rust is a 1975 album by Joan Baez. Baez is often regarded as an interpreter of other people’s work, and on this album she covered songs written or played by Bob Dylan, Stevie Wonder, The Allman Brothers, and Jackson Browne. But Diamonds & Rust also contained a number of her own compositions, including […]