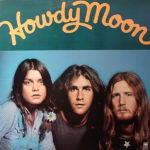 Howdy Moon was the solo album by the band Howdy Moon, released in 1974. The band included Valerie Carter, Richard Hovey, and Jon Lind. The trio of friends moved to Los Angeles where they were signed by A&M Records and played at The Troubadour. Many of the musicians from the band Little Feat are featured on the album.

6 And You Never Knew