“Top of the World“ is a rock song written by the group Van Halen for their 1991 album For Unlawful Carnal Knowledge. It is one of six singles issued for the album, and spent four non-consecutive weeks at the top of the Billboard Album Rock Tracks chart in the U.S., becoming their eighth number one on this chart. It was the only single off the album to crack the top 40 on the Billboard Hot 100, peaking at #27. The main guitar riff from “Top of the World” is actually carried over from the closing guitar background riff from 1984’s “Jump”. 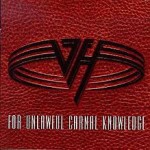