In 1991 Rod Stewart recorded the song for his album Vagabond Heart. The song was produced by Trevor Horn. It is the album’s opening track, and was released as its first single. The single reached No. 3 in the UK chart and No. 5 on the US chart. The melody is an adaptation of “Loch Lomond”. The meter, stanzas and lyrics are also based on the poem, a nod to Stewart’s own Scottish heritage. Eric Rigler played the Great Highland bagpipes heard during Stewart’s version.

Stewart’s version of the song was subsequently used during the closing credits of the 1996 family movie Loch Ness. The single was also played during the bar scenes in the 2000 film The Perfect Storm, scenes which are set several months after Stewart’s song was released (October 1991) so the song gives a time-period context.

“Rhythm of My Heart” was also covered by Runrig, who released it as a single in 1996. This is the version heard on the Loch Ness soundtrack when it was released on CD in 2005, instead of Stewart’s version heard in the movie. A live version of the song from his 2013 performance at The Troubadour, West Hollywood was included on the deluxe edition of the album Time. Amy Macdonald and Stewart performed the song (with adjusted lyrics) at the opening ceremony of the 2014 Commonwealth Games in Glasgow. 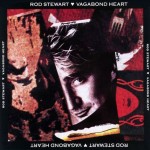