Then & Now is a half studio/half greatest hits album by British rock band Asia. The six tracks 1–5 and 10 are from earlier albums (“Then”), while the four tracks 6–9 inclusive are new recordings (“Now”). It was released on 14 August 1990 in the United States by Geffen Records.

The record debuted at No. 114 on the Billboard 200 chart and was certified Gold by the RIAA on 23 July 1998. “Days Like These”, written by the former band leader for The Unforgiven, Steve Jones, received airplay on FM radio and made it to No. 2 on the American Hot Mainstream Rock Tracks chart. 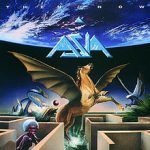