Fahrenheit is the sixth studio album by Toto, released in 1986. It was their first album to feature Joseph Williams on lead vocals. Former lead singer Fergie Frederiksen was fired due to problems with his ability in the studio. However, he sings backing vocals on the song “Could This Be Love”. It was also the last Toto album to feature keyboardist Steve Porcaro as a permanent member, as he left after the Fahrenheit tour. The album failed to go gold until 1994, but featured two top forty singles in “I’ll Be Over You” (#11) and “Without Your Love” (#38). Singer/Dancer Paula Abdul appears in the video for a third single, “Till The End”. 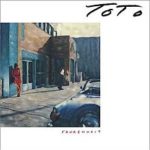 Leave a Reply to Mikael Sandgren on Facebook Cancel reply