Melissa Manchester (born February 15, 1951) is an American singer-songwriter and actress. Beginning in the 1970s, she has recorded generally in the adult contemporary genre. She has also appeared as an actress on television, in films, and on stage.
Nice Girls is an extra track on the Greatest Hits album released in 1983. 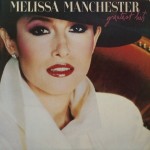