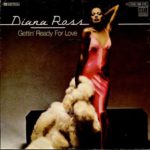 “Gettin’ Ready for Love” was a much bigger hit on the Adult Contemporary charts of both the U.S. and Canada, peaking at #8 in the U.S. and #6 in Canada.

The song features an alto sax solo and strings, at the bridge.

Baby It’s Me is a 1977 album released by American singer Diana Ross on the Motown label that peaked at #18 on the Billboard Top 200 and #7 on the R&B album chart. The album was produced by producer Richard Perry. The LP yielded one Top 40 hit, “Gettin’ Ready for Love”, reaching number 27 […]