“Hard to Say I’m Sorry“ is a song by American rock group Chicago. It was written by band member Peter Cetera and producer David Foster, and released on May 17, 1982 as the lead single from the album Chicago 16. The song hit number one for two weeks on the Billboard Hot 100 chart on September 11 of that year.It was their first top 50 hit since “No Tell Lover” in 1978. In the fall of 1982, while it was moving down the Hot 100, it just left the top 50 within two weeks from #4.

The song, as well as the album on which it is featured, was a marked departure from Chicago’s traditional soft rock, horns-driven sound, taking on a polished and modern feel. There were minimal horns on the track, instead featuring more layered synthesizers and heavier distorted electric guitars in a contemporary 1980s styling. This was done to revitalize the band that was considered by some to be past its commercial prime at the time.

The album version of “Hard to Say I’m Sorry” segued into a second song titled “Get Away,” which was closer to the older horn-driven Chicago sound. Most adult contemporary radio stations at the time did not play the entire album track, however, choosing to cut it off just before “Hard to Say I’m Sorry” segued into “Get Away.” About half the Top 40 radio stations played the longer version with “Get Away”.

Deviating from Chicago’s practice of having mostly band members playing on their albums, “Hard to Say I’m Sorry” featured several session musicians. The song featured producer David Foster on the piano, as well as three members of the American rock band Toto: Steve Lukather on guitar, while David Paich and Steve Porcaro both contributed synthesizers. The song’s vocals were performed by Peter Cetera. 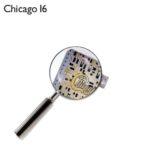