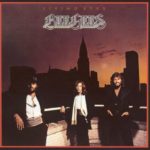 Living Eyes is the Bee Gees‘ sixteenth original album (fourteenth internationally), released in 1981. The Bee Gees turned away from the disco sound that was prominent on their work in the mid-late 1970s with this album. However the album was not a commercial success, perhaps due to them being so strongly associated with disco. It sold 750,000 copies worldwide, compared to 16 million copies of their previous studio album Spirits Having Flown in 1979. While it did not sell well in either the UK or the US, the album itself was a Top 40 hit in the majority of territories in which it saw wide release.

Recording began early in 1981 without the Bee Gees band that recorded and toured with the group in the late 70’s. Barry felt that he could create the sound he wanted with sessions musicians instead of a band and features musicians including Don Felder, Jeff Porcaro, Richard Tee, George Terry and Steve Gadd. Also, the Bee Gees stated they were trying to avoid being pigeonholed as a disco act which is why the album also features minimal falsetto vocals (which had become a Bee Gees trademark by that time), with one notable exception being the song “Soldiers”.

Barry, along with producers Albhy Galuten and Karl Richardson had developed their own production style, with Spirits Having Flown and Barbra Streisand’s album Guilty. But Robin and Maurice had become active in the studio again, contributing more to vocals and production, which created some tension between them and the Gibb-Galuten-Richardson production team. Galuten later commented on why Living Eyes failed to impact both US and UK charts:

“There was a tremendous fear, that we had fallen into a rut, and I felt strongly on Living Eyes that it was time to change. When we started working on [it] and it was not being fun, I remember sitting around with my friends at the time, and saying, ‘It’s just not working and I think that I’m going to leave.

Living Eyes also features the return of Robin and Maurice Gibb as a lead vocalist since 1975 in a whole song. As Barry says that his falsetto was the reason why Robin (or Maurice) didn’t take lead vocals (in a whole track) on any song by the group between 1976 and 1979: “‘God, every falsetto record we’re putting out is a monster, we shouldn’t change yet’. That’s what stopped us from saying, ‘Well it’s time Robin had a lead’. But now it’s no longer a sales point, it’s important that Robin’s voice get heard. It’s equally important that Maurice’s voice gets heard. And it’s becoming less important that I get heard. And that’s the way we work. There’s no ego within the three of us, whoever’s singing most or whoever has the most hits is irrelevant”.

4 Don’t Fall In Love With Me

6 I Still Love You

8 Nothing Could Be Good