Totally Hot is Olivia Newton-John‘s ninth US and tenth international studio album. Released in November 1978, it became her first solo Top 10 (No. 7) album since 1975’s Have You Never Been Mellow. Dressed on the album cover all in leather, Newton-John’s transformation in Grease from goody-goody “Sandy 1” to spandex-clad “Sandy 2” emboldened her to do the same with her music. The album’s singles “A Little More Love” (No. 3 Pop, No. 94 Country, No. 4 AC), “Deeper Than The Night” (No. 11 Pop, No. 87 Country, No. 4 AC), and the title track (No. 52 Pop) all demonstrated a more aggressive and uptempo sound for Newton-John. (The “Totally Hot” single was remixed for commercial release adding an instrumental bridge that lengthened the song by over thirty seconds from the original album track. As well, “Deeper Than The Night” was remixed to 4:56 and released in Europe on a 12″ disco single format.) Newton-John filmed promotional videos for all three singles and wrote two of the album’s tracks, “Borrowed Time” and “Talk To Me”.

Although the album de-emphasized Newton-John’s country sound, it still reached No. 4 on the Billboard Country Albums chart. Newton-John released the B-side, “Dancin’ ‘Round And ‘Round,” of the “Totally Hot” single to Country radio – the first time since her 1975 single, “Let It Shine/He Ain’t Heavy … He’s My Brother”, that Newton-John worked both sides of a single to different radio formats. “Dancin’ ‘Round And ‘Round” peaked at No. 29 Country  and is her last charted solo Country airplay single to date. (The song also charted Pop (No. 82) and AC (No. 25) after Totally Hot completed its chart run.)

The album was certified Platinum in the United States and the single, “A Little More Love”, was certified gold. The album only reached No. 30 in the UK (where it was also released as a limited edition picture disc) but it was certified Gold and the single “A Little More Love” reached No. 4 on the UK Singles Chart (itself certified Silver), and was even a surprise Number One single in Israel. The album was a Top 10 success in Australia, Canada and Japan (although none of its singles charted in Japan). The album was re-released in Japan during 2010 featuring two bonus tracks – an extended version of “Totally Hot” and “Love Is Alive” from her 1981 live album, “Love Performance.” 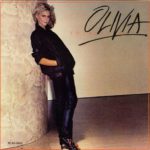