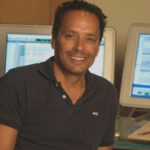 Buchanan began playing the piano at the age of 6. He acquired his first paying gig as a pianist at the age of 12 playing 6 nights a week in Dawson City, Yukon Territory. While still a teenager, Buchanan joined a band called Soul Unlimited, at the suggestion of friend Tom Baird. In the years that followed, Buchanan eventually moved to Los Angeles, California to write music with Carl Graves.

1985 Bill Withers – Watching You Watching Me

1985 Patti Austin – Gettin’ Away With Murder

1987 Jennifer Holliday – Get Close To My Love

1987 Kenny Rogers – I Prefer The Moonlight

1988 Barbra Streisand – Till I Loved You

1988 Masatoshi Nakamura – Across The Universe

1989 Larry Carlton – Christmas At My House

2004 Clint Black – Christmas with You