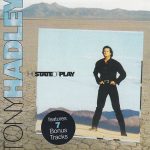 The State Of Play is the first solo album by singer Tony Hadley , former vocalist of the British Spandau Ballet group released for the EMI label, in 1992.

From the album, which does not have a great commercial success, despite the flawless vocal performance of the singer (one of the few to have studied singing among the very many self-taught people of the eighties ) two singles are extracted: Lost in Your Love and For Your Blue Eyes Only . The first of the two 45s (which is also the opening song of the 33 rpm ), in the single CD edition, also includes two unreleased works performed live in a 1992 concert , held in Germany and taken up by German TV , Why Can’t We Fall in Love? and Theme No. 7 , the first of which is written by Tony Hadley alone, while the second is composed by him together with the faithful Keeble; both unreleased live tracks are produced and mixed by Hadley and Keeble with Chapman ( Andy Reilly is instead the sound engineer). As for the songs included in the long playing , Tony Hadley signed 5 out of 12. Among the other pieces, the signatures of the English duo Climie Fisher ( You Keep Me Coming Back for More ) and the American composer Diane Warren ( Just the Thought of You ), which he wrote for many artists: an illustrious example consists of a considerable part of the most successful solo repertoire of the singer of the US female band Go-Go’s , Belinda Carlisle .