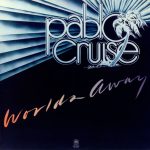 Worlds Away is the fourth, and most successful album, by the California soft rock group Pablo Cruise. The album charted higher than any other of the band’s albums, reaching #6 in the United States. Three singles were released from the album: Love Will Find a Way, Don’t Want to Live Without It, and I Go to Rio, reaching #6, #21, and #46 respectively. The title track, Worlds Away was not released as single, but remains a favorite among many fans of the band today.

Before the album was recorded, original bassist Bud Cockrell left the band and was replaced by former Santana member Bruce Day as new band member, but according Bill Schnee it is Mike Porcaro who did the bass in the studio.