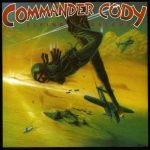 Flying Dreams is an album by Commander Cody, released in 1978

The band’s style mixed country, rock ‘n’ roll, Western swing, rockabilly, and jump blues together on a foundation of boogie-woogie piano. It was among the first country-rock bands to take its cues less from folk-rock and bluegrass and more from barroom country of the Ernest Tubb and Ray Price style. The band became known for marathon live shows.