1976 Robert Palmer – Some People Can Do What They Like 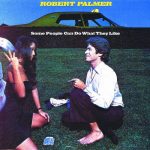 Some People Can Do What They Like is Robert Palmer’s third solo album, released in 1976. It includes “Man Smart, Woman Smarter” which peaked at No. 63 on the Billboard Pop Singles chart and No. 46 in the UK in 1977. The album peaked at No. 68 in the US. The album was dedicated to Mongezi Feza.