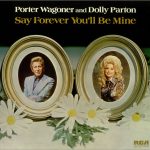 Say Forever You’ll Be Mine is a 1975 album by Dolly Parton and Porter Wagoner. It would be their last album of new material together until 1980.

A 45 RPM Single with Porter Wagoner & Dolly Parton was recorded by Porter Wagoner for RCA Gold Standard Stereo Series on August 21, 1972 of “Say Forever You’ll Be Mine” and “How Can I (Help You Forgive Me)” was recorded on February 12, 1973 for the ‘B’ side of the single. The album titled “Say Forever You’ll Be Mine” may have been released in 1975, but it would appear these songs were recorded long before then. Also, it appears the 45 RPM single wasn’t released by RCA until 1976.