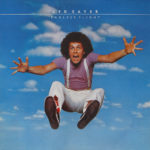 Endless Flight is the fourth album by English singer-songwriter Leo Sayer, which was released in 1976. It was released in the U.S. and Canada by Warner Bros. Records and in the UK by Chrysalis Records.

The album consolidated his international popularity, reaching #4 in the UK and #10 in the USA; it also charted strongly in other countries including Sweden, Norway, the Netherlands and New Zealand, and was certified as a platinum album in both the UK and the USA, and double-platinum in Canada. The peak of his career came in 1977, when he scored two consecutive US number one hits, first with the disco-styled “You Make Me Feel Like Dancing” (a Grammy Award winner for the year’s best Rhythm and Blues Song), followed by the romantic ballad, “When I Need You” (1977), which reached number one in both the UK and US. Written by Albert Hammond and Carole Bayer Sager, it was Sayer’s first UK #1 single (after three number two hits). It was also the first of two UK chart-toppers in a row for producer Richard Perry.

1 Hold On To My Love

4 When I Need You

6 I Hear The Laughter

9 I Think We Fell In Love Too Fast