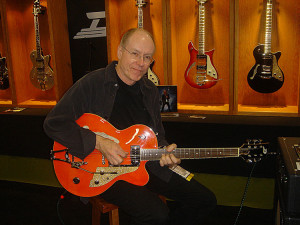 Dean Parks is an American session guitarist and record producer from Ft. Worth, Texas.

Parks features on Cat Beach’s albums Letting Go and Love Me Out Loud. In 2008, Parks participated in the production of the album Psalngs, the debut release of Canadian musician John Lefebvre.

Dean Parks is very prominently featured on Viktor Krauss’ album “II” (2007), where he plays a plethora of other stringed instruments in addition to electric and acoustic guitars.

During the late 1970s Parks joined up with Bread for their “Lost Without Your Love” reunion tour, taking on the responsibilities of lead guitarist. Following the departure of founding member Jimmy Griffin, Parks then became the ‘unofficial’ fourth member for the duration of the 1977/78 tours, including the visit to England to record a BBC TV special. He also continued the role when Bread’s co-founder, David Gates, put together his own solo touring band shortly afterwards. In the spring of 2005 he joined David Crosby and Graham Nash on their European tour, as well as their U.S. tours in fall 2007, fall 2008, and spring 2011.