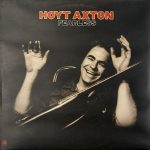 Fearless is the fifteenth solo album by Hoyt Axton. It was released in 1976

Hoyt Wayne Axton (March 25, 1938 – October 26, 1999) was an American folk music singer-songwriter, and a film and television actor. He became prominent in the early 1960s, establishing himself on the West Coast as a folk singer with an earthy style and powerful voice. As he matured, some of his songwriting efforts became well known throughout the world. Among them were “Joy to the World”, “The Pusher”, “No No Song”, “Greenback Dollar”, and “Never Been To Spain”.

1 Idol Of The Band

8 A Stone And A Feather