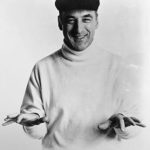 Leaving the U.K. in 1955 to work in the U.S., Feldman recorded with Ronnie Scott’s orchestra and quintet from 1954 to 1955, which also featured other important British jazz musicians such as Phil Seamen and Hank Shaw. It was Scott who recommended that Feldman emigrate to the U.S., which he did in 1957. Once there, his first steady work was with the Woody Herman Herd. From there he went on to join Buddy DeFranco. In 1958, he had his own working band on the west coast, which included the innovative bassist Scott LaFaro. His 1958 Album The Arrival of Victor Feldman includes LaFaro and Stan Levey on drums. He recorded with many different jazz artists, including Benny Goodman, George Shearing, Cannonball Adderley and Miles Davis, most notably on Davis’ 1963 album Seven Steps to Heaven, the title tune being his own composition. The 5-CD Shelly Manne Black Hawk set, originally released on LP in September, 1959, is a good representation of Feldman’s unmistakable driving “comping” behind the soloists, helping to define the session as a valuable hard bop genre element.

1969 David Ackles – Subway To The Country

1978 Anita Lindblom- Love In The Shadows

1978 Kerry Chater – Love On A Shoestring

1981 The Manhattan Transfer – Mecca For Moderns