Lenny Castro (born September 19, 1956) is an American freelancing percussionist in the studio recording industry in the Los Angeles area.

Castro is a percussionist of Puerto Rican descent and was born and raised in New York City. His father, Hector Castro, played the keyboard in a Latin style and gave his son his first pair of congas when he was five years old. Along with the congas the junior Castro played the bongos, which he grew up performing on the streets. Unlike many of his “Latin brothers”, Castro listened and played percussion not to just Latin music but jazz, rock, classical, and anything else that could have percussion added in. He claims not to have planned on becoming a studio musician, only that he wanted to play music. Whether this meant live or in recordings, he didn’t care as long as he got to play.

Castro later began to make money with different gigs in New York, which he called a “playground” at the time, when he was around 14 or 15. This lasted him until he graduated from high school in 1974.

After graduation Castro went to Mannes college with a scholarship that a high school teacher had helped him to acquire. However, he quickly tired of college and dropped out. He found a job at a famous drum shop in New York where he worked for three or four months. 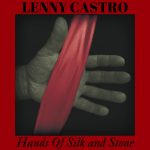 Through this store, Castro got a big break with Melissa Manchester who had a hit at the time, “Midnight Blue”. After Castro did a couple of tours with her, Manchester moved to Los Angeles. Castro, 19 at the time, did not want to give up this opportunity and left New York City to follow Manchester and his career. Her producer later introduced Castro to fellow producer Richard Perry. Perry had Castro play at a Diana Ross session, which is where he met Jeff Porcaro. Porcaro got Castro a gig with Boz Scaggs, who had just released Silk Degrees. Scaggs toured all around the world with Castro as his percussionist. This tour is what landed Castro the Toto gig and also kick-started his Los Angeles session legacy.