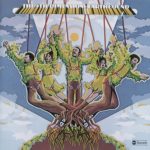 Earthbound is the twelfth album by American pop group The 5th Dimension, released in 1975 by ABC Records. It is the last album in the group’s original line up with Billy Davis, Jr., Marilyn McCoo, Florence La Rue Gordon, Lamonte McLemore and Ron Townson. After touring with the 5th Dimension in support of this album, Billy Davis, Jr. and Marilyn McCoo (being married since 1969) left the group to work as duo and solo artists.

In contrast to most of their prior albums, Earthbound features synthesizers prominently in many of its tracks—particularly “Magic In My Life” and “Moonlight Mile.” “Magic in My Life,” the second and final single released from the album (“Walk You Feet in the Sunshine” was the first), a fan favorite, was also unusual in that it was the first 5th Dimension single to feature Florence LaRue on the lead (she would frequently be the lead on successive 5th Dimension singles with various lineups).

While this album was not commercially successful, it remains a cult favorite among many 5th Dimension fans who consider it among their best work. Other fans take a dim view of it. Perhaps owing to its singular status as an ABC Records product, for decades the album remained the only one from the original 5th Dimension lineup not re-released on CD. However in 2014 it was announced that it would be available beginning in June, 2014, though Real Gone Music.

5 Magic In My Life