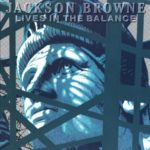 Lives in the Balance is the eighth album by American singer/songwriter Jackson Browne, released in 1986 (see 1986 in music). It reached number 23 on The Billboard 200 chart. The title track as well as “For America” and “In the Shape of a Heart” were released as singles. The album was ranked number 88 on Rolling Stone’s list of the best 100 albums of the 1980s

Lives in the Balance was the first album by Browne where overtly political and socially critical songs dominated (three of which were about president Ronald Reagan), although it also included one of his best remembered songs about relationships, the tragic “In the Shape of a Heart”, inspired by his relationship with his first wife. The radio play garnered by “For America” and “In the Shape of a Heart”, and the use of “Lives in the Balance” in the show Miami Vice, gained him many new fans who later went back and discovered Browne’s earlier works.

The lesser commercial success of the album, according to a Rolling Stone November 1989 article, hardly mattered to Browne: “I like this album as much as any I’ve ever done,” Browne said. “And there’s a certain comfort, a security that I have, talking about something that I feel this strongly about. And whether or not an album succeeds wildly or not, that’s intact.”

3 In The Shape Of A Heart

6 Lives in the Balance