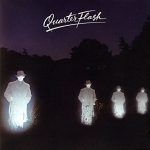 Quarterflash is an American rock group formed in 1980 in Portland, Oregon. The band was originally made up of the only two current members, Rindy Ross (lead vocals and saxophone), her husband Marv Ross (guitars), along with Jack Charles (guitars), Jon Propp (keyboards/synthesizers), Rich Gooch (electric bass), and Brian David Willis (drums and percussion). Having a lead singer who also played the saxophone made Quarterflash notable. In a 1982 interview, Rindy Ross said that she viewed the saxophone as an extension of her voice, enabling her to express things she could not express with her voice alone

So sad to hear of the passing of Mike Porcaro. A tremendous bass player from a family of tremendous musicians. I got to know Mike in ’81 when we hired him to play bass on “Williams Avenue” on the first Quarterflash album. The song was about 8 minutes long and had many different grooves and sections – the chart took 2 music stands to hold. We used Mike because the song called for thumb-ing and poppin’ – something that Bob Glaub – the bassist we had used up til then, was not comfortable with (this was before Rich Gooch joined the band). Mike was humble, a quick study, and eager to do whatever worked for the song. I was a tad nervous around him because of my lack of theory and inability to express my ideas with the proper musical nomenclature, but Mike consistently gave me support through the two-day sessions. I ran into him a few times on the road and he was always there with a quick smile and exhibited a gentle spirit. RIP, Michael, you played music your whole life – and that is a blessing.