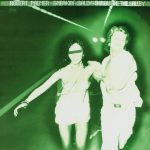 Sneakin’ Sally Through the Alley is Robert Palmer’s debut solo album, released in 1974. It was his first effort after three album releases co-fronting the band Vinegar Joe.

Palmer is backed by The Meters and Lowell George of Little Feat. Multiple reviewers have commented that Palmer sang confidently on this album, despite being backed by more accomplished musicians such as Lowell George, Art Neville and New Orleans singer-songwriter Allen Toussaint. Recorded in New Orleans, Louisiana, New York, and Compass Point Studios in Nassau, the album was released on compact disc in 1987 by Wea manufacturing. The album peaked at #107 in the U.S. according to the Billboard 200 chart. The title track is used on the video game, Driver: San Francisco, and is frequently performed by the jam band Phish.

3 Sneakin’ Sally Thru The Alley

7 From a Whisper to a Scream

8 Through It All There’s You