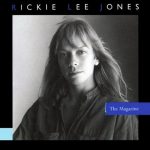 The Magazine is an album by Rickie Lee Jones, released in September 1984. It is her third full-length studio album, and was released as the follow-up to Pirates (1981). The album was partly composed in France and was co-produced by Jones and James Newton Howard.

After the release of Pirates in July 1981, Jones spent 1982 on the road on tour before kicking her addiction to heroin and cocaine. A 10-inch EP, Girl at Her Volcano, had been released in 1983 and Jones took up residence in Paris in April 1983 for four months. Jones said: “I got an apartment for $800 on the Boulevard des Invalides, where they have all the political demonstrations. I wasn’t in such great shape and, appropriately, I lived with the invalids.” It was also in Paris that Jones kicked her alcohol habit. She told Timothy White in Musician in 1984: “I started drinking…more heavily than I had ever drunk in my life. I drank for about six weeks. When I started waking up and drinking in the day, I figured-umm, bad news. I don’t know how I quit drinking; I finally just drank too much one night an said “That’s enough of this, it’s awful.” I think I went to Paris to put it together; I had to be in an absolutely foreign environment, to take stock.”

Jones had been working on fragments of songs, such as “Juke Box Fury,” “Gravity,” and the initially Shirelles-inspired “Runaround,” since 1981, before finding more inspiration in Paris. The first full song written was “Deep Space,” precipitating a spurt of creativity from October 1983. Recording work for the album began on January 18, 1984 and was completed on June 1 before a September release date.

The opening instrumental “Prelude to Gravity,” written in France and London, was originally titled “Things Made of Glass” and was written by Jones for inclusion in a planned children’s fantasy she wrote about “two little girls who keep their most prized possessions, thoughts and dreams in these special jars.”

The album ends with a musical suite entitled “Rorschachs,” with “Theme for the Pope” co-written by long-time collaborator and former romantic partner Sal Bernardi.

4 It Must Be Love

9 Theme For The Pope

10 The Unsigned Painting / The Weird Beast