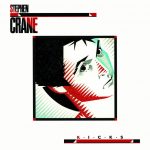 Stephen Crane used to play in a band called Baby at the end of the seventies but his opportunity as solo artist arrived in 1984 by the hand of the major MCA label.
Stephen’s debut “Kicks” was produced by Jai Winding (Le Roux) who also played keys, and no-other than the great Steve Lukather. In fact, all TOTO guys were involved in the recording including groove master Jeff Porcaro on drums. We also find Richard Page (Mr. Mister, Pages) and AOR guru Tom Kelly (I-Ten, Van Stephenson, Survivor) doing backing vocals, together with brilliant session guitar players such as Duane Sciacqua, Joey Brasler and Ray Pannell.

The multitude of guitarists has an explanation; “Kicks” for the most part is a guitar driven AOR / Melodic Rock album with a 1984’s radio friendly sound. And on most tracks, we found three different six-string axeman playing together in the same song. Crane’s pumping bass lines add even more muscle to the tunes, and his sometimes raspy but melodic vocals reminds you a cross of a young Brock Walsh, Van Stephenson on the calmer moments and Paul Sabu on the edgy. There’s not a single weak track here, going from hooky and catchy numbers like “Headed For A Heartbreak”, “Joanne” or the urgent “Victims Of Love”, to more AORish cuts such as the Toto-esque “Back On My Feet Again” (featuring a killer Lukather solo) and the Van Stephenson sounding “I’ll Take Care Of You”.  (Source: http://hardrockaorheaven.blogspot.nl)

1 Headed For A Heartbreak

7 Back On My Feet Again

10 Crying Don’t Look Good On You